In addition to being a public health threat, avian influenza is also costly and potentially devastating to people whose livelihoods depend on raising poultry. To enable faster detection of bird flu and identification of its subtypes, scientists at Wageningen Bioveterinary Research in The Netherlands developed a multiplex assay using xMAP® Technology.

In this 20-minute video presentation, veterinarian Evelien Germeraad reports on the development and validation of that assay. Wageningen Bioveterinary Research, part of Wageningen University & Research, is a national reference lab for infectious animal diseases, receiving samples for testing from all over the country. The lab tests cattle, poultry, goats, and other types of animals for illnesses ranging from rabies and tularemia to psittacosis and foot-and-mouth disease. Scientists there run as many as 300,000 assays per year, of which 20,000 are deployed for avian influenza, the main focus of Germeraad’s talk.

Poultry Industry in The Netherlands

In The Netherlands, the poultry industry is valued at about €1.5 billion. The country is home to 100 million chickens, and bird flu is not uncommon. Recent outbreaks occurred in 2003, 2014, and 2016. In the 2014 outbreak, which affected just a handful of farms, nearly 250,000 chickens had to be culled to contain the pathogen. This enormous scale of loss is why it’s so important to diagnose avian influenza quickly, Germeraad says.

One of the challenges of testing for avian influenza is the broad range of subtypes. There are 16 types of hemagglutinin in birds, plus nine types of neuraminidase, making for a large number of H+N protein subtypes of the virus. Some strains have low pathogenicity, while others are so severe that mortality can rise to 100% in just a few days, Germeraad says. Conventional serological assays — such as ELISA, hemagglutination inhibition testing, and agar gel immunodiffusion — are time-consuming, require high volumes of sample, and do not all produce subtype-specific results.

For a faster test that would identify all subtypes, Germeraad and her team turned to xMAP Technology and the MAGPIX® system. They designed a single assay with 54 beads to cover all subtypes from a small serum sample. Results come back showing median fluorescent intensity for each protein. In a validation study using 87 chicken samples, 92% of results were concordant with conventional assays. Since then, the assay has been used on hundreds of bird samples, including swans, ducks, and turkeys in addition to chickens. Going forward, Germeraad hopes to optimize the assay further to establish more accurate cut-offs and improve sensitivity. 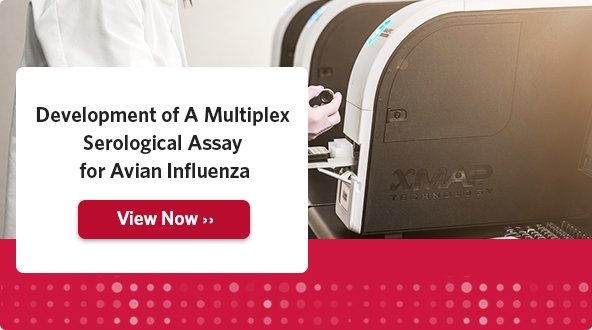