Scientists use multiplexing technology to look for dozens of antibiotic signatures

At the RIKILT institute at Wageningen University & Research in The Netherlands, the mission is “safe and reliable food for everyone” — which is why scientists are diligently developing new tests to assess the health of livestock. In this video presentation, researcher Jeroen Peters describes his team’s use of xMAP® Technology as the foundation for assays that detect antibiotics in raw milk, water, and other farm samples.

Detecting the Presence of Antibiotics

The misuse of antibiotics in livestock, primarily to promote rapid growth, has led to many drug-resistant strains of bacteria colonizing the animals we rely on for food, Peters notes. Though the EU banned the use of antibiotics as a growth promoter in 2006, there is still a real need to determine just how prevalent these drugs are in farm use.

The RIKILT team uses antibodies coupled to probes on beads for detecting the presence of antibiotics. Luminex’s multiplexing technology allows the team to interrogate dozens of antibiotics, and Peters’ team is continually adding to the number that their assays can detect. In the latest version, they’ve added some antibodies from mouse, rabbit, and goat to expand the test’s utility. He points to the flexibility of xMAP for scientists who rely on RIKILT to handle their testing: clients can ask for a test that detects only subsets of the broader assay, and his team can run only the needed conjugates.

In one example of how the assay is used, Peters showed a regular car outfitted with a Luminex instrument in the trunk for on-site detection of antibiotics. In the case reported, his team went to a chicken farm and analyzed feathers. The antibiotic results were later confirmed back at the lab with LC-MS/MS.

For anyone interested in setting up a similar assay, Peters offers plenty of technical detail about conjugate development, establishing threshold values and cut-off factors, checking cross-reactivity, and validation steps.

Going forward, the team aims to add more antibiotic groups to the assay and to expand detection to other milk contaminants as well. They’re also looking at broadening the types of samples they can analyze. On the development list: animal urine, feed mixes, and fish tank water. 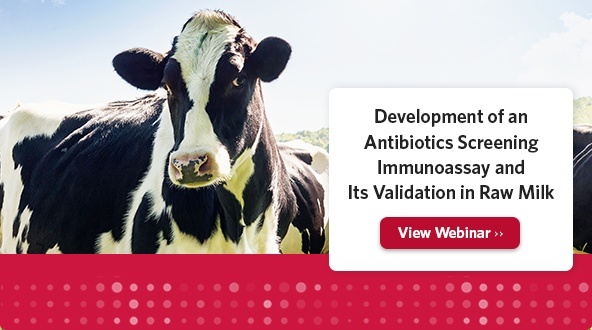