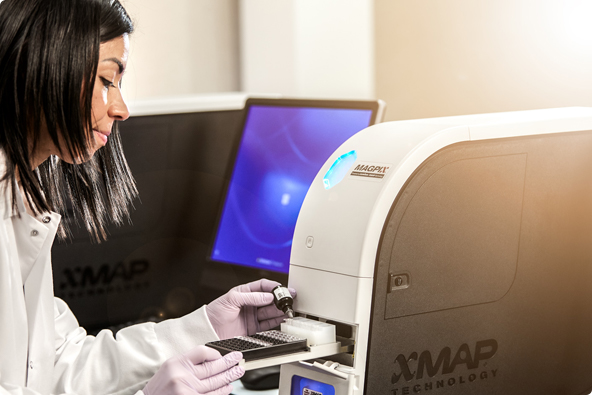 In a recent LabRoots webinar, Dr. Imad Tarhoni from Rush University Medical Center in Chicago offered a look at how his team developed a multiplex serological assay that they believe could be the cornerstone to a large-scale national COVID-19 testing strategy. They built the assay using xMAP® Technology to take advantage of its strong performance and multiplexing capabilities.

In his presentation, Tarhoni noted that large-scale community testing will be essential for controlling the pandemic, particularly because so many infected individuals never exhibit symptoms. Nucleic acid testing for viral RNA, while effective, is only useful for a short period of time after infection. That’s why Tarhoni believes that serological assays, which can detect antibodies to the SARS-CoV-2 virus after infection, will be so important for population-scale testing.

This kind of testing has been limited thus far because until recently, existing COVID-19 serology tests weren’t sensitive or specific enough to avoid false negative or false positive results.

To address this problem, Tarhoni and his team used xMAP Technology to develop a new serology assay for COVID-19—one that would take advantage of its multiplexing capabilities by incorporating four viral antigens, ensuring the most accurate results possible. Whether a person has developed antibodies to the virus’s spike, nucleocapsid, membrane, or envelope protein, this test can detect a true positive result.

The scientists conjugated all four antigens onto xMAP beads and optimized the assay for linearity, detection limits, precision, cross-reactivity, and more. Next, they dove into validation studies to ensure that the assay delivered reliable results using dried blood spot samples, which would be the most useful sample type for a nationwide testing strategy. In addition to confirming the utility of dried blood spots, they also demonstrated strong results from 384-well microtiter plates, which will be needed for any high-throughput approach. Importantly, by reducing the antibody capture incubation step, they brought the turnaround time down to less than four hours, with no loss in assay performance.

For clinical validation, the team launched a number of studies encompassing more than 1,000 samples from control populations and COVID-19-positive populations. The final review, including 1,178 cases collected at least six days after infection, demonstrated an assay sensitivity of 100%, specificity of 99.6%, and accuracy of 99.6%. “That is outstanding performance compared to other tests,” Tarhoni said.

He noted that the ability to test dried blood spot samples—which could be collected at home and mailed to labs for analysis—provides a convenient, cost-effective means of testing large groups of people. Information gathered from such testing could guide policy decisions about when to stay home and when it’s safe to return to work. It would also be important for evaluating plasma in blood banks for use in convalescent plasma therapy, monitoring vaccine efficacy, and epidemiological surveillance.

For more information about how their test was developed, view the entire presentation here. 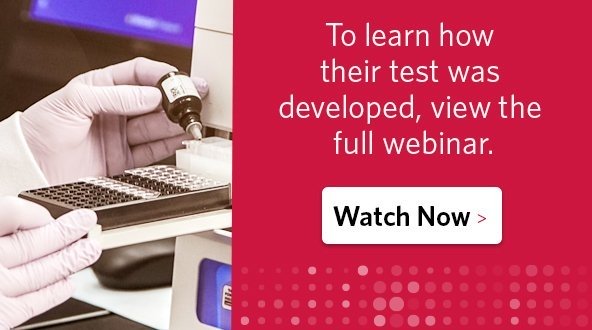