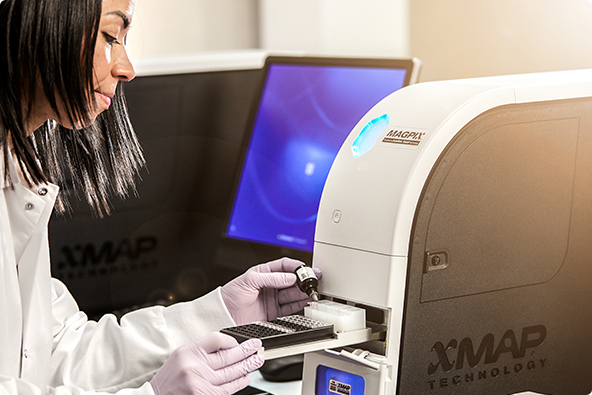 Each winter, testing for respiratory viruses constitutes a significant proportion of the workload for the laboratory’s molecular department. Indeed, last year, the team responsible for those tests processed 18,000 samples during Ireland’s largest influenza season since the pandemic period of 2009-2010. They accomplished this with the NxTAG® Respiratory Pathogen Panel (RPP), an automated, real-time PCR-based assay.

NVRL scientists haven’t always used NxTAG RPP. For many years, they relied on a lab-developed test that was initially an influenza screen but had been continuously expanded until it was a fully-fledged multiplex panel. “We were all very familiar with it,” says Senior Clinical Scientist Allison Waters, “but we could see in the last couple of years, with the increasing demand for testing, especially for a wider variety of respiratory pathogens, that we weren’t able to turn around results in a meaningful timeframe.”

To Upgrade or Choose Commercial

Waters, who is charged with overseeing service development in the institute’s molecular virology laboratory, was faced with the choice of upgrading the internally-developed test or looking for new commercial options. “We identified NxTAG as a test that would give all the results we had been giving but had a much-expanded repertoire of pathogens that it was capable of detecting,” she says. “That was beneficial to us because a number of our users had started introducing influenza testing or RSV testing at the source, so we wanted to offer them more than just those first-line results.”

Being the influenza reference lab in Ireland comes with certain pressures. Capacity is one: at peak season, Waters’ team might run as many as 400 respiratory samples per day. They needed a platform that could reliably meet that throughput for the entire season. “NxTAG had that advantage,” Waters says. Even with the needed controls, her team could load 93 samples per run — a significant boost from their own test’s maximum of 60 samples per run.

Another significant pressure is turnaround time since the laboratory is based on a University – rather than a hospital – campus, and samples come from hospitals where physicians are waiting for results to make the best treatment choices for their patients. In addition to requiring a 24-hour turnaround time, Waters insisted that any sample that arrived at the lab by 10:00 a.m. needed to be processed and reported back by that evening. Again, NxTAG RPP fit the bill.

Managing the Roll Out

After an initial verification of the assay in 2016, Waters decided to roll out the test in a controlled fashion to help her team and the lab’s clients get used to it. For that first flu season, she chose to use it only with respiratory secretory samples, which typically come from patients with more serious illness, often kids. “It’s fair to say we really challenged the RPP assay,” says Waters.

Two months in, Waters and her team conducted an in-depth review of the results they had generated. Data were checked to see if it made sense clinically, and some samples were re-run with other tests to check for concordance. “We could see that the Luminex system was performing well,” Waters says. “We had excellent sensitivity, specificity, and positive predictive values for all the pathogens we had detected during that eight-week time frame.” The experience was such a success that by the 2017-2018 flu season, the team expanded its use to all respiratory samples.

Waters credits the NxTAG RPP with helping her team respond better to client issues. For example, “We were able to very quickly identify, for the first time, that RSV type B was responsible for the large pediatric seasonal epidemic of 2017/2018.”

More broadly, the wide range of results reported by NxTAG RPP might allow healthcare teams around Ireland to understand viral trends better and even influence prescribing guidelines. Due to its sensitivity and large number of pathogens it can detect, the assay is providing new insight into the number of viruses circulating in the population, as well as how many viruses might be present in any individual sample, Waters notes. In one specific example, RPP results have shown that rates of atypical pneumonia appear to be much lower than anticipated, which might help physicians reduce the unnecessary use of certain antibiotics.

User feedback has been positive as well. “The users were delighted to have all the results coming back at the same time, without their having to keep adding on if an initial result was negative,” Waters says. 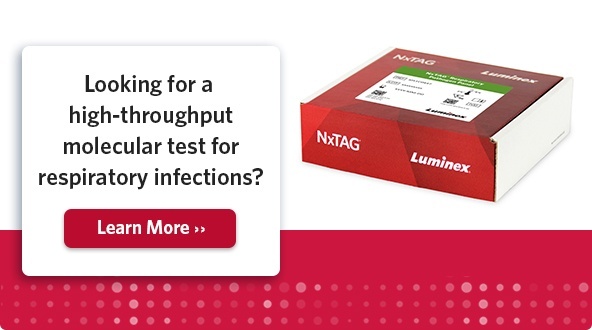