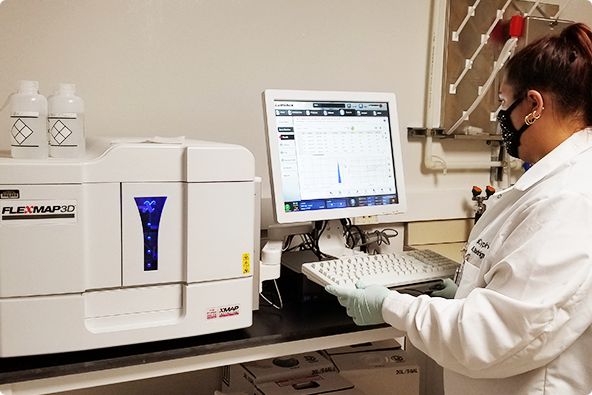 As one of Luminex’s Licensed Technologies Partners, EpiCypher is one of many companies that uses xMAP® Technology to deliver important solutions for improving research and molecular diagnostics.

Based out of the Research Triangle Park in North Carolina, EpiCypher is a biotechnology company that helps scientists push the boundaries of research in chromatin regulation, chromatin mapping, and epigenetics. They do this through the development and production of modified recombinant nucleosomes, and have leveraged this technology for a wide range of quantitative chromatin assays.

Founded in 2012, EpiCypher aims to address the growing need for high-quality epigenetic reagents. They pioneered the production of recombinant designer nucleosomes (dNucs™), which contain defined post-translational modifications (PTMs) and recapitulate the natural nucleosome structure observed in vivo, making them ideal substrates for a variety of chromatin assays.

One application of dNucs is SNAP-ChIP™ Spike-in technology, which uses panels of DNA-barcoded dNucs as spike-in controls to examine antibody specificity (on- and off-target binding) and efficiency (percent pulldown relative to input) during a ChIP-seq workflow. Spike-ins can also be used for data normalization, highlighting the utility of these reagents for chromatin profiling.

In addition to developing and commercializing reagents, EpiCypher scientists also contribute research. “Our goal is to not only bring our customers cutting-edge epigenomic technologies, but also serve as a research partner,” says Leslie. “We have a unique business model that allows us to work with other scientists, either through collaborations, services, or projects, to answer challenging research questions.”

Why are nucleosome controls important for epigenetic research?

This revelation led to an initiative by the EpiCypher science team to leverage SNAP-ChIP controls to screen for reliable histone PTM antibodies for ChIP-seq experiments. “The SNAP-ChIP Spike-in Controls identify next-generation antibodies that are truly ‘ChIP-grade,’” Leslie mentions.

How is EpiCypher using Luminex technology?

To effectively analyze these large sets of antibodies, they first conjugate nucleosome panels to Luminex xMAP beads so the beads denote PTM identities. Then, they add an antibody of interest. “We run the reaction on the Luminex FLEXMAP 3D® to detect what nucleosome or nucleosomes bind to the antibody,” Keli explains. If 90% of antibody-bound nucleosomes are attached to the expected PTM of interest, then it is approved for further testing in ChIP with SNAP-ChIP Spike-ins.

After screening hundreds of antibodies, EpiCypher identified a collection of the highest-performing ChIP antibodies—this data will be published by the end of this year, which will allow researchers to be able to more easily identify the best antibodies for future ChIP experiments.

Why does multiplexing matter for EpiCypher’s work?

Multiplexing was a key feature EpiCypher scientists were looking for as they evaluated options for screening antibodies. “Some of the other assays we ran prior to utilizing xMAP took a lot longer,” Keli explains. “The Luminex workflow gives a lot of information in a very short period of time.”

By multiplexing, EpiCypher can test an antibody against an entire panel of modified nucleosomes in one reaction. “It’s a great feature to be able to work with 500 different analytes in a single well, using extremely low volumes for each reaction,” Carolina says.

Another advantage: the system’s robustness. The team performs all the washes typically used in ChIP assays, thus replicating key experimental steps that are necessary to predict an antibody’s performance using SNAP-ChIP Spike-ins. “The beads are able to withstand all these different reagents and stringent wash conditions,” Carolina adds.

As a result, EpiCypher’s Luminex-based antibody screening method can be adapted for a range of buffer washes, and can be applied for antibody testing across different assays—this flexibility will be helpful when the EpiCypher team expands multiplex testing to their other genomic mapping assays.

“We are developing similar nucleosome controls for CUT&RUN and CUT&Tag experiments, and plan to use Luminex for those as well, so we can identify top-performing antibodies for these novel chromatin profiling assays,” Keli concludes.

Multiplexing offers significant advantages over traditional methods for delivering reliable answers to complex questions. Whether it’s saving time and resources for researchers like our partners at EpiCypher, or accelerating discovery for large-scale screening projects, there’s a multiplex solution that can meet the needs of your workflow.

Are you interested in developing, manufacturing, and commercializing your own multiplex assay on an efficient, flexible, and widely-adopted platform? Contact us here.

To learn more about EpiCypher’s latest technologies, check out their website at: epicypher.com 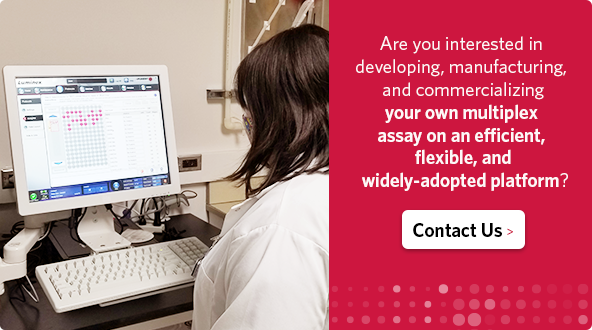