Multiplex serology tests have yielded impressive results, showing promise for use in the COVID-19 pandemic. 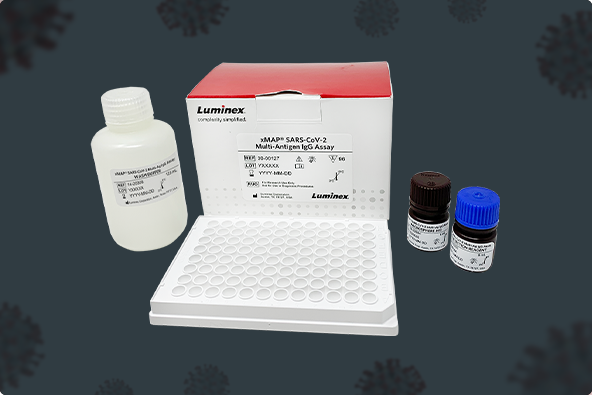 To demonstrate how these tests may make a difference, we’ve summarized how some xMAP-based serology tests have been used for clinical lab applications, as well as for epidemiology and surveillance.

Providing multiplex results you can rely on

One of the earliest applications of a multiplexed xMAP serological assay involved the screening of HIV antibodies in dried blood spot specimens for early detection of HIV exposure in neonates. Developed by Bellisario et al., this assay was able to simultaneously measure antibodies to three different purified recombinant HIV-1 antigens (p24, gp120, and gp160). The extra specificity of this assay meant it could distinguish 92 previously tested newborn specimens as either HIV-negative or HIV-positive, and was also able to clearly differentiate anti-HIV-1 blood spot controls (zero, low, and high) from the CDC.

In another application, Wu et al. used the xMAP platform to develop a sensitive, rapid, high-throughput multiplexed serological assay for identifying specific IgG antibodies to nine hemorrhagic fever viruses. Performance data with clinical serum samples demonstrated sensitivities of 90.7–98.04% and specificities of >90% for all but two of the viruses.

Respond to outbreaks with trusted technology

xMAP bead-based serological assays have also been implemented in outbreak situations. Ayouba et al. developed a multiplexed serological assay for the Zaire Ebola virus using nine recombinant proteins. The performance of the assay was evaluated with 94 positive and 108 negative samples, and revealed high sensitivity and specificity. Additionally, this high-throughput xMAP assay was extremely cost-effective when compared to the single-plex ELISA ($4 vs. $54 for each sample), and could therefore be easily and economically implemented to screen large sample volumes in an outbreak situation.

In addition to pathogen identification, detection of serological markers can provide additional information to estimate recent and past exposure to the pathogen. xMAP-based multiplex serological assays have been well-established in epidemiology for surveillance purposes.

To monitor vaccine-preventable diseases, Caboré et al. developed a pentaplex immunoassay for the simultaneous detection of IgG antibodies against diphtheria, tetanus, pertussis toxins, and other pertussis antigens. Their assay demonstrated good correlation with ELISA, a low intra- and inter-assay variability score, and was successfully implemented for performing large serosurveillance/seroprevalence studies.

O’Hearn et al. developed a similar multiplexed assay to detect IgG antibodies against Lassa, Ebola, Marburg, Rift Valley fever, and Crimean-Congo hemorrhagic fever viruses, as well as pan-assays for flaviviruses and alphaviruses. Their study highlights the importance of surveillance, as the results revealed that in addition to Lassa virus (which is endemic in West Africa), other strains of viruses are also responsible for hemorrhagic fever, but often go undetected, and ultimately, untreated.

To aid in the detection of COVID-19, Luminex recently received Emergency Use Authorization for an xMAP-based antibody assay to help identify individuals who were exposed and developed an immune response to SARS-CoV-2. The xMAP® SARS-CoV-2 Multi-Antigen IgG Assay provides highly specific and sensitive results by targeting three different antigens and using an algorithm to determine positivity. 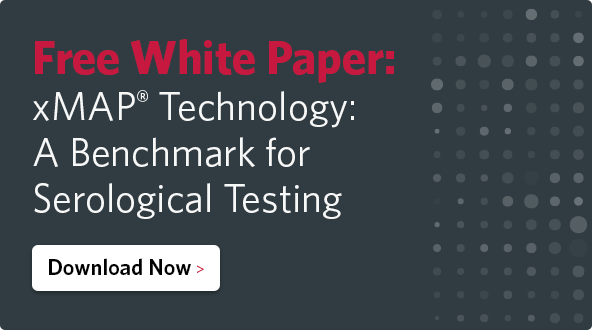