In the past several years, scientists have made rapid strides in characterizing the role of the gut microbiome — discovering along the way that this bacterial community has broad implications for diseases ranging from asthma and hypertension to diabetes, obesity, and even mental disorders. These discoveries spurred the Norwegian company Genetic Analysis to develop a test for dysbiosis of the gut microbiome to help physicians make more targeted treatment recommendations. That test, based on Luminex xMAP® Technology, is described in detail in this 20-minute video presentation from Finn Terje Hegge, chief technical officer of Genetic Analysis.

The Genetic Analysis team chose xMAP as the foundation for what’s now known as the GA-map® Dysbiosis Test based on previous success with the platform during an EU-funded project, which involved a 40-plex research test for biological changes related to dietary fiber. Knowing that high throughput would be important for the gut dysbiosis test, scientists once again turned to Luminex as they designed the new 50-probe assay. According to Hegge, other benefits of the xMAP system include its broad detection range, reliability, and short development time.

In his presentation, Hegge offers practical information that’s useful for anyone interested in developing a multiplex assay. The Genetic Analysis team focused on creating a meticulously standardized test that could be run reliably in any lab; Hegge walks through their technical considerations on DNA extraction, target amplification, probe labeling, hybridization, and detection. He also offers tips for reducing intra- and inter-assay variability, such as hybridization and labeling controls and an extra wash step. Finally, Hegge shows the custom-built report generated as part of the test workflow. Designed to be simple and useful for physicians, the report includes a general dysbiosis indicator for the patient in addition to probe-specific results.

The new test, which was based on a reference population of healthy individuals, became the first CE-marked IVD microbiome test for routine use in patients with potential gut dysbiosis. Early adopters include Synlab and Texas Children’s Hospital. Hegge and his team are currently expanding the GA-map® product portfolio into more specific treatment advice in IBS. Looking ahead, another project is to document GA-map® bacteria profiling for prediction of treatment response in IBD patients.

The presentation is supplied by the presenter listed and is not endorsed by Luminex Corporation. 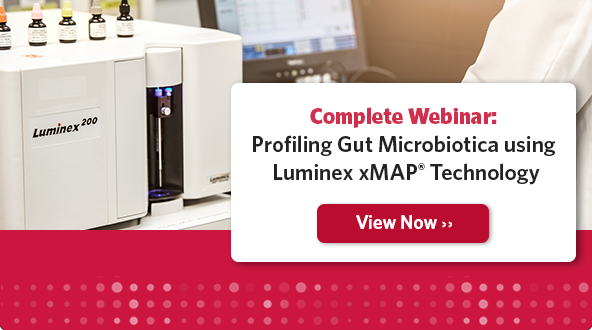