New efforts to improve the diagnosis of rheumatoid arthritis, as well as to guide treatment selection, are making strong progress thanks to xMAP® Technology from Luminex, according to a recent presentation from Erik Lönnblom of the Karolinska Institute. Multiplex immunoassays have allowed his team and collaborators to generate 1.5 million data points so far — a feat that would otherwise have required nearly 16,000 ELISA plates to achieve.

Lönnblom works in a lab focused on characterizing epitopes to type II collagen, which is a candidate autoantigen for rheumatoid arthritis. The protein, which is quite difficult to work with, is highly conserved; epitopes are virtually identical across mice, rats, humans, and monkeys. One of the most promising areas of study is a post-translational modification known as citrullination. Anti-citrulline protein antibodies are present in more than two-thirds of patients with rheumatoid arthritis, and they can be detected years before the onset of clinical symptoms of the disease.

There are several diagnostic challenges relevant to rheumatoid arthritis. Lönnblom says the most pressing areas include earlier and more accurate disease diagnosis; prediction of response to treatment; and prediction of disease onset in healthy individuals. As part of a multi-institution consortium, Lönnblom and his colleagues have already made inroads.

That would not have happened so quickly without xMAP Technology for multiplex assays. Originally, Lönnblom says, the plan was to use ELISAs for everything. But as the scientists calculated the number of assays they’d need to run to study the 400 proteins or peptides relevant to rheumatoid arthritis, it became clear the approach was not feasible. Sample requirements alone were a deal-breaker: while each Luminex assay needs just 1 microliter of material, Lönnblom says, ELISA tests for the same biomarkers would consume half a milliliter or more, an amount that no clinical sample repository could part with.

So far, the team has run the multiplex assay on several thousand clinical samples. Already, important insights are emerging. One promising new biomarker appears to predict some established cases of rheumatoid arthritis more reliably than previously known biomarkers. Another seems to predict poor response to a specific therapy, essential information for the grueling trial-and-error method of therapies used for patients today. 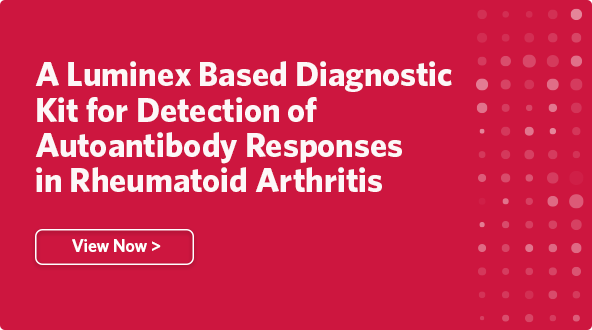